Once upon a time, I planned to be a journalist. But journalists aren’t supposed to “embellish”. So I was going to work in Public Relations, home to great embellishers. But there were a lot of pant suits and power lunches and well, I’m more of a yoga pants and bar-food kinda girl. And then I realized there was only one suitable job for me and I’d been doing it for years. So I took my story-telling skills and got some business-running skills and combine them with my image-capturing skills and there ya have it.

I’ve never fancied myself an artist. Maybe I just don’t have the ego to say, “I’m an artist.” I think of myself as a storyteller, an entertainer, if you will, with a very important job to do. Because at the heart of it – and at the heart of me – this is not about cool camera gear and software tricks. It’s about helping people figure out what’s important enough to capture and keep forever. It’s about making sure your grandkids know what you were like when you were young and raising the babies that become their parents. It’s about creating permanence in a world that is painfully fleeting.

Beyond my camera, I’m wife to my high school sweetheart, mama to two sweet girls and a cool little dude and human to a goofy Boxer dog. They are my family, my favorite people, and in a twist I never saw coming, my coworkers.

At some point, my rockstar of a husband realized how cool my job was and begged to be a part of it. He pretty much sucked but I taught him everything I know.

I wish that was true. The jackass picked up my camera to “play around” one day and when I downloaded the images I discovered he was a natural. I saw no choice but to hire him on the spot. 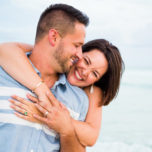 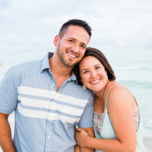